27 March is the World Theatre Day. From 1978 a message is delivered before the performance begins on each stage of each country of the world.  The aim of the theatre day is to draw attention to the importance of theatre - and in a broader sense - of culture, to pay tribute to actors, theatre workers, and to ask for the love and support of the audience.

Although there are Roma theatre companies all over Europe, in the last 42 years the International Theatre Institute never asked a theatre maker of Roma origin to convey a message to the stages of the world. Year by year, the Independent Theater Hungary invites an artist with Roma ancestors to tell his/her message. 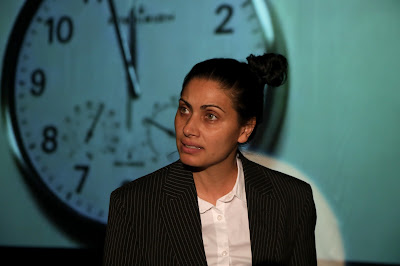 “When I think of the theatre, I imagine a world where theatre represents the citizens, and my culture has a place on stage, too. Unfortunately, this is not the case, even if the Roma people have been playing a role in the history of Europe for 700 years.

In the theatre my soul was filled with hope, my mood was upbeat, and I felt myself at home because I was happy to play. Later, I noticed that there’s few Roma who can practice this profession. I belong to those who had the courage to choose this profession. Then I soon realised why I am assigned only stereotyped roles, why I am always pigeonholed.

The quality of theatre cannot be measured by the number of the audience. Considering the whole society, theatre is an institute for a minority. However, don’t we measure the world of democracy by the fate of the minorities living in it?

Theatre is interesting and good if it explains the world.

After all, theatre is the place where society reflects on life in general. My attention is captured when I feel that the play deals with serious questions: love, death, social and political conditions, when I feel personally addressed as a member of society.

However, I don’t feel addressed at all when the “Gipsy Baron” is on stage. The language still offends me and many other Roma people. The Volksoper in Vienna can still make flyers and advertise a play in which there are no Roma actors at all, and that represents only a corny cliché-like “gipsy image” known by the majority.

The play ignores not only the undignified conditions in which most of the Roma lived but also the fact that when the canonised light opera was made, most Roma groups had settled, did not wander on their well-known  ‘green wagon’ from one place to the other, but they lived together with the majority of society. If the ‘Gipsies’ are regarded persona no grata of the multi-ethnic state, how is it come that ‘the outcast’ could become the subject of the entertainer industry in the heyday of the light opera.

On this basis, this tendency became the authentic vision of society in the period, and for the art of Romantism it became the intellectual background again and again to depict the ‘Gipsy  lifestyle’, which satisfied the audience of the Decadent movement both musically and dramaturgically. The opera is the product of the majority that excluded and persecuted the Roma for centuries, and this tendency lives on in this light opera performed in Vienna, too. It’s the well-designed construction of the Gipsy stereotype that was created by the majority during the centuries.

I ask the question: Why do the cultural policy of Austria, the sponsors and the banks support such an opera with an unbelievably huge amount of money? The performance they support doesn’t help the community, the nation, society and tolerance but popularises racism in the city of Vienna, and what is more, tries to make it presentable.

I wish a Roma theatre that hasn’t been realised in Vienna yet. A theatre where we can tell our own stories about our ancestors. Here, in Austria the stories of the Sinti and the Roma haven’t been told like that of the Jews, otherwise ‘The Gipsy Baron” couldn’t be on programme now.

Numerous plays and operas could be written based on our stories, we just need a place to play, recognition, and support from those who owe us. We need places and theatres that are available for us, where the Roma people can play, work and show the world their still unknown stories. Many people don’t know the real ‘Roma’ people, they just believe to know them based on the distorted and false idea they have in their minds.

Let’s make a theatre that includes people who respect each-other, where high-quality stories are told, a theatre that our descendants are delighted about, too. Let’s become an example for the next generation so that they can learn from us. Don’t let them live in an art world that is full of clichés and racism.