KOSOVO MON AMOUR – on the international day of theatre 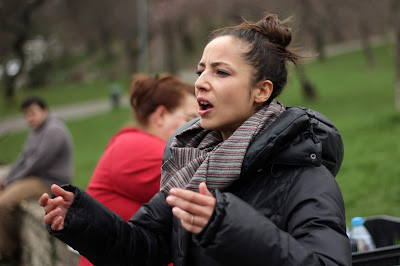 Yashar and his wife, Elvira are running a pub in Kosovo during the South Slavic war. The hate campaign against the nations creates more and more corruption, violence and absurd life situations among people who are relatives and once were friends but became sworn enemies of each-other all of a sudden. The play illustrates a society suffering from propaganda of hatred, nationalism, lies and manipulation in a shocking way. A society which Hungary starts to resemble. (Rodrigó Balogh, director)

„When bulls are fighting, the grass is suffering the most.” The play was written by Ruzdija Sejdovic living in Köln and his partner Jovan Nikolic. It was presented in the Phralipe Theatre of Germany in 2000, in the direction of Rahim Burham.


Time of the premier: 27 March 2020, on the occasion of the international day of theatre
Place of premier: RS9 Theatre, BUDAPEST, RUMBACH SEBESTYÉN str.9.
Tickets: Click here!


The performance is presented by the Independent Theatre Hungary supported by Goethe Institute.