"Roma heroes – Five European Monodramas" – this is the title of the first international Roma drama collection in the world.
Five stories from five different countries are included in the book. The plays guide us through Ireland, United Kingdom, Switzerland, Hungary and Romania.  Each play deals with the story of a Roma hero. The aim of the book is to disseminate these stories, which show the values of Roma theatre and Roma communities, to as many people as possible. 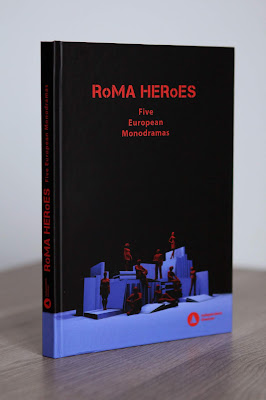 The plays included in the book:

·The Hardest Word by Richard O’Neill presents the campaign of Jess Smith, the Scottish Traveller writer who demanded the first minister to apologize for the injustice and persecution of the Traveller community.
· It’s a Cultural Thing. Or Is It? by Michael Collins also shows the past of Traveller people, this time in Ireland.
· Tell Them About Me by Michaela Dragan deals with the topic of early marriages through personal stories of various Roma women in Romania.
· Speak, My Life by Dijana Pavlovic tells about the long years of Yenish genocide in Switzerland that ended in the '70ies through the eyes and based on the novel of the Yenish writer, Mariella Mehr.
·Letter to Brad Pitt by Franciska Farkas is a painstakingly honest confession about the actress' own life, with a touch of dark humor.

The book can be bought in English and in Hungarian languages. Please place your order at fuggetlenszinhaz@gmail.com.